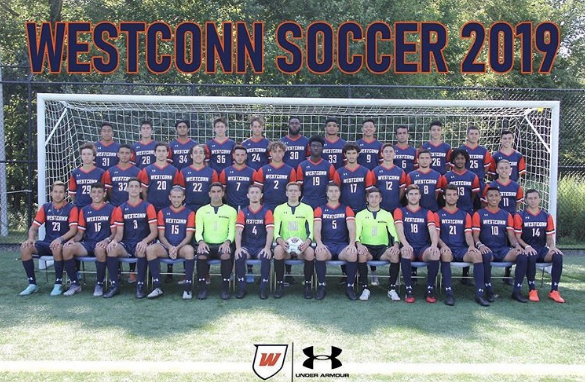 The Western Connecticut State University Men’s Soccer Team have picked up the 2019 season where they left off following two straight Little East Conference Championship-winning seasons. The team, led by head coach Joe Mingachos, has a record of 3-1 after opening the season with four consecutive away contests. Following an opening day loss to Vassar, typically a tough matchup for WCSU, the Colonials surged to three straight wins over St. Joseph’s (L.I.), Elms College, and MCLA in a span of only six days.

The Colonials have returned the majority of their defense from last year, including junior goalkeeper Daniel Szabo as well as their senior captain and central defender Spencer Ranno, both of whom recorded impressive seasons last fall that included First Team LEC All-Conference selections. Rounding out the defense this year is senior captain outside defender Nick Falstoe, senior Tommy Langkafel, and sophomore outside defender Lucas Araujo, whose impressive start to last year’s season was cut short by an ankle injury. The Colonials have always taken pride in their defensive work ethic, and they have managed to concede just three goals in their first four games.

Ranno, who won LEC Rookie of the Year during his freshman campaign and has anchored the Colonials’ back line ever since, said of the Men’s level of play during their season-opening road trip: “what has stuck out to me through the first four games thus far is our ability on the ball and in possession. We have an unmatched desire to win the ball back when we don’t have it, but the composure to keep the ball when we do win it back.”

And while the defense has been formidable, the Colonials’ impressive offensive display has been the story of the season thus far. Led by freshman Franz Muhaj, who has found the back of the net four times in as many games, the team has already scored 12 goals this season. Muhaj’s hot start earned him a spot as a joint top-scorer, Offensive Player and Rookie of the Week for the LEC in his first week of competitive contests for the Colonials.

But every goal-scorer needs assisting, and the Colonials’ front line need not look any further than junior midfielders Afa Reyes and Max Cano, who accompany Ranno and Falstoe as captains of this year’s squad. Reyes is tied for first place in the LEC with three assists, and co-captain Cano is just behind him with two, showcasing the great distribution from the midfield which has been so essential to the Colonials’ success during their back-to-back LEC Championship-winning seasons

After they travel to Coast Guard for a 6:00 p.m. matchup on Tuesday, the Colonials will be in the WAC for the first time this season as they take on Emmanuel (Mass.) at 7:00 p.m. on Thursday.