“Step up – show support for survivors of sexual assault in the colleges across the state of Connecticut. We just want to raise awareness, encourage students to be supportive.” – Jill Daddona, Campus Counselor/Advocate on the message of Step Up Against Sexual Assault

During the Step Up Against Sexual Assault event, students were encouraged to decorate green flags with messages of positivity. The green flags were later placed near Old Main, surrounding numbered purple flags. The purple flags represented approximately how many college students are averaged to experience instances of sexual assault throughout Connecticut colleges in a single year; the total count being over three hundred, most of which are never reported to campus authorities. The purpose of having the green flags securely surround the inner circle of the purple flags was meant as a metaphor “to show how over time, raising awareness can lead to the number of people supporting victims and stepping up against sexual assault outweighing the number of sexual assault cases.” – Melissa O’Connor, Campus Counselor/Advocate, and Child Counselor/Advocate 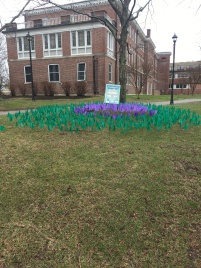 With college communities across Connecticut showing their support, it is the Step Up Against Sexual Assault campaign’s hope that more people will be encouraged to speak up and report sexual assault cases to campus/local authorities

“There’s need,” said Melissa O’Connor when asked about the importance of speaking out against sexual assault on college campuses, “for an increase in reporting, for more people doing so because there’s more word about it. Since there are positive reassurances and people reaching out to offer support to others around campuses, it’s our hope that those sexually assaulted feel more comfortable, safer, reporting to campus authorities.”

The Women’s Center of Greater Danbury has been working with and offering support to those in need at Western Connecticut State University for ten years now. Step Up Against Sexual Assault is one of the many awareness movements WCoGD hosts yearly on campus.

(The significance of having sexual assault campaigns this month is the fact that April is Sexual Assault Awareness Month.)

However, while anyone can walk up to the WCoGD’s table and decorate a flag, they can also stand on the other side of the table and help out. Whether a student volunteers with WCoGD’s offices on campus because doing so will earn them credit for a class assignment, or because they simply support whichever cause the center is advocating for/against at the time, the on-campus counselors are always happy to have help and support.

To learn more about how you can further raise awareness, help the Women’s Center of Greater Danbury, to seek out support for yourself, or find out how you can help a loved one you believe might be in need of support, check out the following ways to make contact:

*ALL services are FREE and CONFIDENTIAL*

The Women’s Center of Greater Danbury’s latest on-campus campaign against sexual assault is Denim Day, which will take place in the Midtown Student Center tomorrow, Wednesday, April 26th, from 11 am to 2 pm. The center will have a table where students and staff may go to learn more about Denim Day and help to spread the word against sexual assault. However, you might see a number of people around campus sporting “Ask Me About Denim Day” stickers to accompany their article(s) of denim-based clothing in support of the day. (More information can also be found at http://denimdayinfo.org/)