Many working people are homeless simply because they can’t come up with a security deposit. Off the Streets is a spin-off of the Dorothy Day House that was established to get people with a source of income out of the shelters and into housing.

The program was initiated by middle school students and has now boasts four chapters, two in Conn., one in Penn., and one in Calif.

In the eight years since the program was established, Off the Streets has helped 1,500 people get into housing.

According to the Administrator, Joe Simons, the program is constantly looking for ways to expand the operation because the concept can be applied in any community.

“It’s simply that there are a lot of people out there who are homeless, not because they don’t have income, but because they can’t get over the initial hurdle which is the security deposit,” said Simons.

The program collects furniture the first Saturday every month from 10 a.m. to Noon behind the First Methodist Church in Bethel.

Anybody who wants to donate small table and chairs, twin beds, chest of drawers and other basic necessities or money to help pay security deposits can visit the website at http://offthestreetsnow.com/ for contact information.

The program’s founder, Deacon Mike Oles, was a volunteer at the Dorothy Day House who is often asked to speak about homelessness to religious education groups at middle schools. He brings homeless people to his sessions to add a face to the concept he is addressing.

During one of Oles’ sessions in Norwalk, the students were so taken by the homeless person who tagged along that they decided to take up a collection to get the man out of the shelter and into housing. The man was a hard worker who simply needed a security deposit.

Students continued pestering Deacon Oles about when he was going to get the man housed. At that time, Oles had mostly worked with people in the shelter, but had no experience with getting people housed.

Deacon Oles eventually used the money to pay the security deposit. And after that, another collection was taken, and another. Oles finally realized he could do this as a program, which turned into a separate mission from the Dorothy Day House. 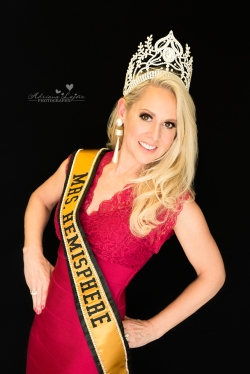 Susan Pagan got involved with Off the Streets due to  her platform in pageantry, which is centered on reaching out to the homeless, refugees, and those living in compromised conditions.

Pagan travels with her husband throughout the world on mission trips reaching out to those in need, but she wanted to do more. She was introduced to Off the Streets through a friend. After reading Oles’ book, she contacted him and they developed a plan to have her as a spokesperson for Off the Streets.

In the coming months, she will focus on trying to get more areas to sign on with chapters. Pagan is determined to travel and speak to congregations or groups of people to encourage them to start a chapter of Off the Streets in their own communities.

Pagan is passionate about helping those who are struggling with homelessness because she emerged from a similar situation where she did not have a place to call home for many years.

“I would like to tell readers that it is very simple to begin a chapter of Off the Streets in your own communities because it literally takes no money to start and there is no overhead, no employees, no office spaces, etc.,” said Pagan.

“Everyone and anyone can help, and finally… never take your home for granted.”