At least, local couple Billy Lucas, 24, and Amor Colombres, 21, seem to live up to that stereotype. Billy, a New Fairfield resident with a laid-back personality much prefers the taste of beer to wine, while Amor, a Psychology major who can make conversation with anyone, would choose wine as her drink of choice.

“It depends on the type of night I want to have,” she admits. But if she had to choose? “Wine. It’s so sweet and delicious on another level.”

To test this stereotype today, twelve local men and women were asked about their drink of choice between wine and beer. The survey did not include hard alcohol because the mixes are too versatile and, quite honestly, some may never land on a decision.

Across the New York border in Brewster, Lili Rodriguez, 20, really only prefers beer that you can buy from your local supermarket.

However, Ashley Murrell, 21, of Stamford, couldn’t make a decision quite as easily. “This is such a hard question. I love beer drunk but I also love wine drunk.”

Neither could Dakota Sarantos, 22, of New Milford. “When I’m out, beer is more casual with people and way cheaper. Wine seems more low-key to me.”

Or Brent Bailey, 23, of New Haven. “Beer socially because I like the taste and you can drink for longer…and wine domestically because it’s so much better.”

Faced with a dilemma of a decision, they were then asked, “If you had to choose one of the two for the rest of your life, which would you pick?”

“Wine is the correct answer,” said Dakota. “Adult drink of the Gods.”

“Wine,” Brent decided. “Beer is bad for your body in the long term.”

Alex Giobbi, 22, who works in the development department at the Prospector Theater of Ridgefield, simply stated, “I’m partial to either.”

But after giving it a couple of seconds to mull it over, he made a decision. “I guess wine because of the flavor and the upper-class mentality, but only if it’s white.”

And then some people know when they like their wine.

Like Mary Sheppard, 21, a Journalism major of Seymour, who is a lover of wines and wines only.

“I prefer wine over beer because I don’t really like the hops or foam of the beer,” she said. “Also, it gets you tipsy quicker and in lesser amounts.” 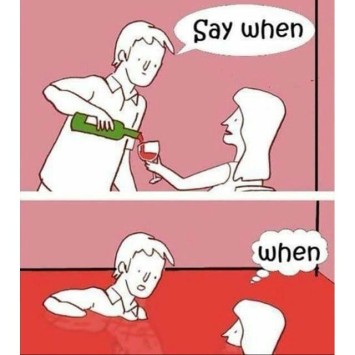 “I prefer wine because it has a sweeter and fresher taste,” he said. “Beer is too aggressive for me.”

Jessica Pascale, 22, a Journalism major of North Haven also sides with the sweet stuff. “Wine, because it tastes so much better than beer.”

“I prefer wine because I find it very relaxing,” she says. “It’s nice to enjoy specific wine with certain foods and it’s less filling.”

But then there’s Leo Budnick – a 22-year-old Stratford resident who, with no hesitation, said, “Beer.” That’s it.

It doesn’t seem that there is some sort of mysterious gender identification based on whether one enjoys beer or wine.

A study by The Washington Post shows similar results.

“The change in preferences isn’t restricted to the country’s youngest drinkers—the whole country, as it happens, has been drinking less and less beer for quite some time now,” the study says.

The general consensus leads us to believe that wine is about taste, as most men and women enjoy it for its sweeter, less bubbly, and slightly healthier factors.

Even Lili’s preference of Angry Orchard acts as a “hard cider,” which can barely be classified as a true beer.

5 thoughts on “Wine leads in deliciousness, leaving bubbly beer in the dust”